How To Rank In The Featured Snippets

In this article we’re going to do a deep dive into Google’s Featured Snippets. What are they, why do they matter? And how can you get yourself to rank inside a featured snippet?

If you haven’t heard of a featured snippet before, it is essentially some texts, a table or a list that Google’s pulled out from a website and presented it in the search results that directly addresses someone’s search query.

What is a featured snippet?

Here’s an example – we typed in “best time to post on Facebook”. And as you can see from the screengrab below the top results is a featured snippet. Google has pulled out some texts from a website and presented the answer to me so that we don’t have to dig much further. 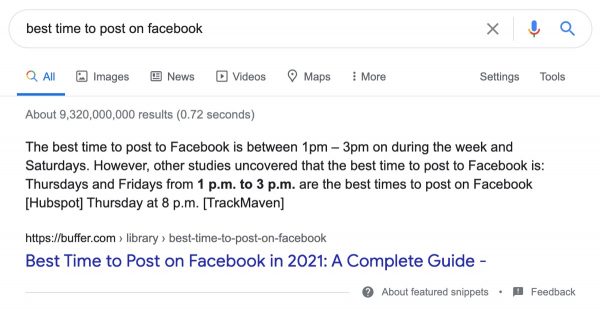 It’s pulled it from the website buffer.com, but if we go further down the page, you can see there many other websites which address this topic as well.

These are the traditional search results, but since the advent of Featured Snippets, these results have been pushed down the results page in favour of featured snippets. Why?

Because Google’s raison d’etre is to provide the very best experience to their users. In the realm of Search this entails finding and packaging up information a user is looking for in the most easily digestible way. Featured Snippets is a great solution to this.

Having your website appear in Featured Snippets is going to get you a lot more eyeballs and potentially a lot more clicks. We say potentially because the result is rendered on the search page which means that in many cases the user won’t need to click through.

This is now becoming a phenomenon known as zero click searches.However the pros are getting into the featured snippet, definitely outweigh the cons in terms of traffic.

Getting into Featured Snippets

The first thing to point out is that there is no straightforward formula you can follow to get into the featured snippet. Google hasn’t published any information on the topic for publishers.

To do this let’s look at the types of features snippets that Google presents of which there are four.

Paragraph or a definition

For example, the keyword we used in the original example, “best time to post on Facebook” is an example of a paragraph or definition type featured snippet. To give yourself the best chance of getting into this featured snippet you should aim to write something that is factual.

Avoid having any opinions or subjective information in your text. You’ll want to think about it, a Q&A – what is the question that someone’s typed and how can I directly answer that question in the simplest and easiest, most factual language?

A good way to highlight to Google that this is an answer to a question is to set the question in a header before the answer. On this page you might have “Best time to post on Facebook” as the question, and then directly below it the text that answers that question.

Finally, research shows that most of these paragraph text elements or definitional elements are actually only 40 to 60 words long. Choose brevity over verbosity. You just want to get to the point when answering the question at hand.

The second type are table snippets. Google simply pulls the table out from a website and presents it in the results. For example when looking for the size of a Goodyear tire you can see the results are presented in a table within the Featured Snippet. This table derives from a website called tiresize.com.

To give yourself the best chance of featuring in this type of Feature Snippet you’ll want to make sure you use an HTML table. You’ll also want to precede the table with an appropriate header.

So you’ve typed in “steps to make coffee”. And again, Google has presented the snippet at the top of the page. It’s taken it from all recipes.com and you can see there’s a simple list of how you go about  making coffee. 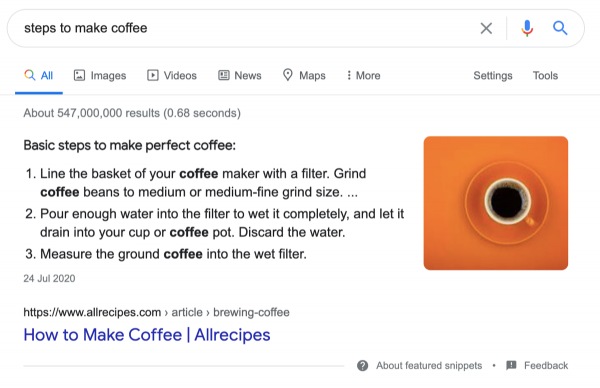 This is known as an ordered list based on the numerical sequence. A good way to get into this is obviously to use numbers and also to make sure that you are consistent in terms of how you use your numbers. Finally be sure to introduce the list with a sentence that establishes the relevancy of the list.

This type is related to the third type, but it’s known as an Unordered List. It’s steps on the list, but in no order, and usually in bullet points. In this example we typed in “best ice cream maker” and the results are presented to me. You can see Google has also included an image pack. 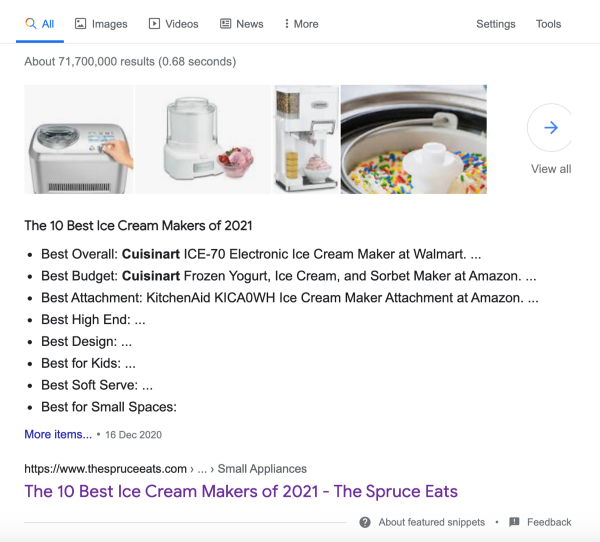 The best way to get into an Unordered List Featured Snippet is to think about your header structure on the page correctly. The first thing to do is to define your header around the topic that the person’s typed in.

And the second tip is to think about taking multiple featured snippets with the same page using long tail keywords. Let’s take the tyre example. You might have a full article on that Goodyear tyres and in there you would have your table about the different sizes.

So you could take the table Featured Snippets, and then you might have some information about pricing or a comparison between different types of tires that addresses another long tail keyword, where you could take the featured snippet for that particular keyword as well.

The final point to note is most of the Featured Snippets that Google presents actually come from search results that are already on page 1 at the top of page 2. Before you start thinking about Featured Snippets, you’ll need to optimize your rankings and try to get your content onto page 1 before you start aiming for the featured snippets.